Last week, my parents and I spent three days in Reno. For much of the last decade, we usually travel there every October for the Great Italian Festival. However, we skipped the event this year and waited until November to visit. In this blog post, I will summarize the action that took place over the three days that we spent there. I apologize if there are not enough photos. I am not used to taking many pictures so bear with me here! Hopefully I remember to take this into account on any future trips. 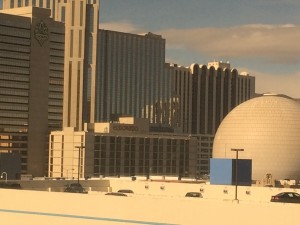 We arrived at Harrah’s late Saturday afternoon. I personally brought $200 for live poker and about $60 in change for video poker machines. My goal was to only play these two games. The reason for that is because they are beatable… and I play to win! As a result of my strict playing requirements, I avoid playing anything at Harrah’s entirely; there was no poker room and the video poker pay tables showed lower payback percentages than those at the neighboring casinos. The only reason why I stayed there was because my parents had complementary free nights. My parents, being the primary slot players that they are, tried the new Britney Spears slot machine next to the Harrah’s buffet. Out of many slots that I’ve watched my parents play, this one looked like a difficult one to win on – low payouts on most wins, even on the so-called “big wins.” They did receive frequent bonus rounds, each of them with their own Britney Spears song.

After walking outside and across the street, we arrived at the Eldorado. The first thing I did when I entered the building was apply for a player’s card. Having played at the Eldorado poker room four times in the past, it’s amazing that it took me this long to acquire a card. After I received my card, I walked past the poker room. Since it was Saturday night, it was busy. I noticed a long waiting list for no-limit hold’em. Near the poker room and across from the promotions desk were four rows of video poker machines. According to www.vpfree2.com, these machines contained some of the best video poker games in the casino. In each of these machines, you can choose your denomination to be 25¢, 50¢, or $1. I play at the quarter denomination for the entirety of the trip. Observing the games and their pay tables, I saw a variation of deuces wild commonly nicknamed “Not so ugly ducks” or “NSUD.” This video poker variation has a payback percentage of 99.73% with optimal strategy and it was the game that I primarily played. Another game I noticed was 9/6 Jacks or Better with a progressive jackpot for the royal flush. Traditionally, 9/6 Jacks or Better has a payback of 99.54%. A royal flush on a 25¢ denomination usually pays $1,000. In this case, the progressive showed a royal flush payout of over $1,400. Using the video poker analyzer available at www.wizardofodds.com, this increases the long-term payback on the game to 100.41%, giving the player a slight edge over the casino. No one would hit the royal flush during my Reno visit. I would end up giving it a try the next day while waiting for a seat at the poker table. That I will describe later in the article.

After losing $20 on the deuces wild game, my parents and I took the escalator upstairs to eat dinner at the Eldorado buffet. After filling my stomach, I set my sights on the Silver Legacy. Luckily, the Eldorado, Silver Legacy, and Circus Circus are connected, so we did not have to go outside to walk to these places. First thing’s first, I acquired a player’s club card here as well. Like Eldorado, Silver Legacy has many great options for playing video poker. In fact, Silver Legacy is one of only two casinos in Reno that have full-pay deuces wild (FPDW). According to vpfree2, there are four machines located near one of Silver Legacy’s corner entrances. If you want more information on FPDW, check out my video poker page and my YouTube video on the topic. The full pay version of deuces wild has a payback of 100.76%. Unfortunately, I was not lucky when I played it. Variance is still an important factor when playing video poker, even when playing a great game. My mom tried it and she had better luck; she tripled her $20 to $60 before cashing out. At the end of the night, I was down about $40. The next day, I prepared myself for a new session at the Eldorado poker room.

Around late morning/early afternoon, my parents wanted to eat brunch at the Harrah’s buffet, however there was a very long line and I was getting hungry. So instead, we walked over to the Silver Legacy’s champagne brunch buffet. After eating, I played some more video poker. This time, I tried 8/5 Bonus Poker with a royal flush progressive. 8/5 Bonus Poker has a payback percentage of 99.17%. This game was really good to me and I made many four-of-a-kinds, including the one below: 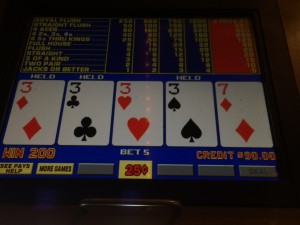 I ended up turning $20 into $110. After my parents finished their slot play, we walked back to the Eldorado. I placed my name on a waiting list at the poker room for $1/$2 no-limit hold’em. While waiting for a seat, I tried the 9/6 Jacks or Better progressive video poker game that I mentioned earlier.

At around 3:30pm, a new table opened and many people, including myself, were called in to take our seats and buy in. I took out my $200 and began with a nice standard starting stack. I always want to start with the equivalent of 100 big blinds in a no-limit Texas hold’em cash game. With blinds of $1 and $2, that would be $200.

I played for about four hours until 7:30pm. Unlike previous sessions, I had a steady climb upward. The two most interesting hands I remember include catching a small $25 bluff raise on the river. I had Ace-Jack. The board had a jack and four lower cards, giving me top pair. Another hand took place where I successfully bluffed on the turn with Ace-King on a Q-2-7-9 board. Taking advantage of the dry board, my position, and my image at the table, I successfully made three people fold on the flop to my continuation bet; one of them accidentally flipped his cards up while folding, showing a deuce for bottom pair. A bet on the turn made my final opponent fold after thoughtful consideration. At the end of the night, I cashed out with $333, a gain of $133. Not the best win this year, but definitely a nice pickup. 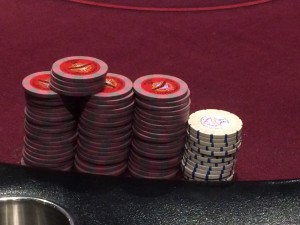 I found my parents waiting near a restaurant as we figured out where we wanted to have dinner. Playing poker four hours straight can be hard on the brain and stomach. I wonder what will happen when I finally enter one of those large-field tournaments like the World Series of Poker. It is amazing to think that one can have the mental focus to play great poker for multiple hours, play multiple days, and come out a winner.

After dinner, I watched my parents play a few more slots as we arrived back at Harrah’s. By 10:30pm, we made it back to the hotel room. Checkout was the next morning.

Since this is the day we left, not much happened. I played one more video poker machine at Silver Legacy just before breakfast. I used the rest of my comp dollars for food. On the drive home, it was snowing across the mountains. Luckily, we passed through before it got worse. 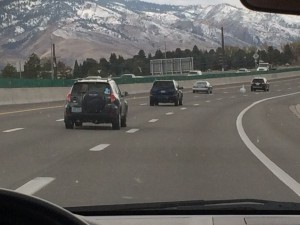 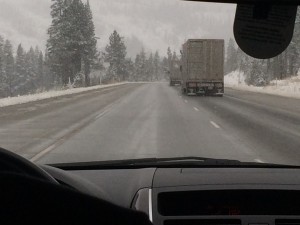